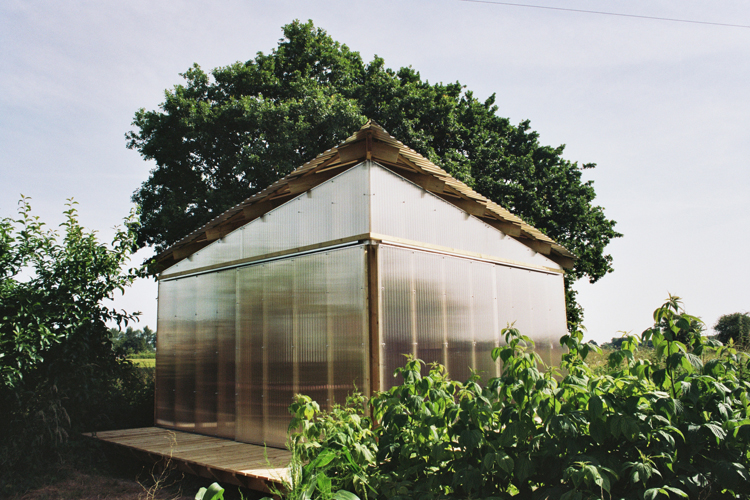 Götzbau is a collage project. It takes as both artistic and practical starting point the set designed by Lothar Götz for his solo exhibition 'Pas de Trois' which was itself a response to Oskar Schlemmer's Triadic Ballet (1922) that was exhibited in the gallery in 2016. The set was fabricated by David Gates (who also at times works under the umbrella of The Rural College of Art) and Rupert Ackroyd. Immediately after Götz's exhibition, Gates presented his own solo exhibition 'Found & Forged' within the set built for 'Pas de Trois'. This was no collaboration, but rather an appropriation … with guarded permission (and after–the–fact). It must also be said that the construction was intended to be a monumental support for a work by Götz which when completed, became a painting in acrylic on beech ply of approximately 9×3.50m.

In 2017, the complete 'Pas de Trois' project (together with the accompanying suite of paintings, drawings, screenprints on silver fabric and vitrines) was selected for an exhibition called 'Enter Stage Left' at the Lewis Glucksman Gallery, University College Cork in Ireland, which was curated by Chris Clarke and Fiona Kearney.

When 'Enter Stage Left' closed, 'Pas de Trois' was delicately wrapped and packed and delivered for safe storage to a shed in Essex that functions as a store for The Rural College of Art. David Gates' practice, it can be interjected here, relies to a great extent on collage, appropriation, happenstance and a methodology that embraces low–tech, craft–based building methods to explore real environmental and cultural values.

To take a step back in order to see Götzbau better: Gates has previously explored various constructions as projects in themselves, each of which have been instigated by others in some mode or other. Aus dem Feld was exhibited in the Wilson Chamber, at the invitation of Eva Wilson as part of Berlin Gallery Weekend in 2013. Snow Hut, a square igloo in Bradfield in 2013 was guest curated by Paul Feigelfeld, via Skype from Shanghai. Bird Hide in 2014 took the form of a construction in reclaimed timber by invitation from Ben Coode–Adams as part of Blackwater Polytechnic. Also in 2014, Standard Image was a solo project included in the Copenhagen Photography Festival, CPF 2014 in Denmark, by invitation from Vuk Srdanovic, constructed within the Old Carlsberg Brewery. All were spaces that functioned as both experiential sculptural works in themselves as well as exhibition spaces. Not included here, yet of shared sensibility in terms of fitting the form to the College (as opposed to the other way round) is the use of a whole caravan, dumped on the College's property in Essex, that was adapted to be used as a single chamber pin–hole camera (cameravan) with which Gates produced a series of monumental photographs known as 'Standard Images' before the caravan itself was donated to the Caravan Banger Destruction Derby at Foxhall Stadium on 29 August 2016 (see youtube link below).

Götz, Gates, Ackroyd, Schlemmer, the Bauhaus, art, art production, design and build, craft, sheds, appropriation, collage, storage, ice, aluminium casting, art handling, reclamation and creative re–use all have a part to play in the Götzbau. The project offers a stand–alone building of 4×4×4m (approx) in a back garden in Essex, with a sunny pastoral outlook across fields almost in Constable Country. Where Götz's paintings on linen were once hung, we now find windows of the identical dimensions replacing them, with the sections of removed painted wood now adapted to become shutters. A roof has been added that respects the line of the Tympanum of Götz's painted structure. It may also be added that this too was no collaboration, rather, yet again, it is an approriation with guarded permission (after–the–fact).

We are extremely grateful to Lothar Götz and to Andrew Curtis (whose solo exhibition Assorted Originals, currently in the gallery, will naturally have to be firmly shut on Saturday 23 May). We also wish to thank Rupert Ackroyd, Chris Clarke, Fiona Kearney, Maud Cotter, Sarah Kelleher, Williams and Hill, Jon Beer, Dylan Shipton, Eva Wilson, Paul Feigelfeld, Ben Coode–Adams, Vuk Srdanovic, Ed Sheldon, Andy Gates and Richard Smith, all of whom have had a part to play in this project. Götzbau will offer a stand–alone built space as an enclosed painting, a sculptural entity, a building. It will offer itself up as an empty space that is full of people.

Domo Baal is delighted to inaugurate Götzbau on Midsummer's Day, Saturday 23 June 2018, by way of a site visit to Bradfield in Essex and a short walk along the Stour Estuary in Constable Country (almost) through and alongside local fields, most probably ending up at Lucca's Enoteca in Manningtree for Wood Fired Pizza (at around 4pm). After this, Götzbau may be visited by appointment with both the gallery and The Rural College of Art. Please contact the gallery for travel and access information.

Meet at Wrabness Station at Noon, trains from Liverpool Street Station to Wrabness take approximately 1hr 10mins and entail one change at Manningtree.