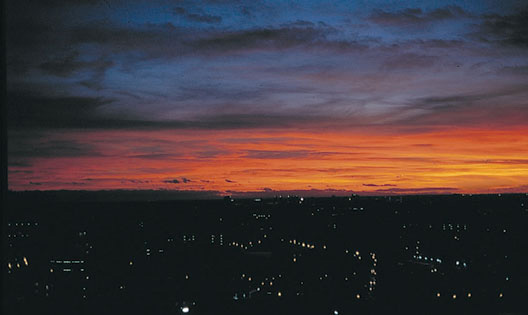 Opening on Friday 30th April from 6 to 9pm, when Bryson Gore will show Magical Butterflies on an ad hoc basis during the opening.

Closing on Saturday 5th June, when Daniel Glaser, will give a talk called Perceiving Magic at 3 pm.

Bryson Gore will perform 'Magical Butterflies'. Gold moves, and levitates without being touched. As part of this work Gore is showing a text by Arthur C. Clark describing his Third Law: "Any sufficiently advanced, or basic, technology is indistinguishable from magic"

Cathy Hawley will exhibit 'Sightlines', a series of drawings which map the presence, and spatial relationships between all the churches in Rome. Rarely out of sight or mind in this capital the churches lead us into thousands of interiors which open off the street into places of worship. Looking beyond the material into another unseen realm.

In 'Serpentine 30.04.03' Louise Cattrell's double rainbow shows one of nature's most magical (or magic) illusions. Transitory and spectacular, they are invested with the connection between Heaven and Earth and bridge between one world and another.

Jean Baird's Quill is a three–part work that celebrates how things are 'written'. The work is a visual play between three photographed objects. A squid, whose body contains a quill, whose polka dot skin can be seen either as camouflage or as an attempt at writing herself. The squid, through the magic of the photograph, shares some formal correspondences with the chocolate umbrella; an already–written feminised object.

Morten L. Kringelbach and Annie Cattrell in 'Unseen Unknown' use the architecture of the building and its open stairway to site an interactive work based on 'subliminal priming' experiments undertaken by neuroscientists as a method of enquiry into how the unconscious sees.

Annie Cattrell will also show a piece about making what is invisible visible and conversely making what is visible invisible. She draws upon 'change blindness' which occurs when an audience is so absorbed by detail that it fails to notice larger changes as they happen, and 'misdirection of attention' when, for example, a magician snaps their fingers or waves their wand in order to divert attention away from a significant moment.

In 'Wildlife Documentary #7' Suky Best will examine flipbooks of seagulls derived from video footage, which have undergone a digital editing process. The footage is then further constructed, choreographed, reconstructed and re–filmed. The seagull images are video stills and their re–presentation on video allows us to see the images 'come to life'. Accompanying sound is released when the flipbooks are operated enhancing the sense of magic experienced at the illusion encountered. This work is shown by kind permission of Danielle Arnaud.

David Cheeseman will exhibit a bejewelled levitating object. He is interested in the 'theatre of illusion' believing that the 'aura' surrounding the magician lies somewhere between that of the priest and the scientist: "It requires a level of discipline, precision and understanding of scientific principles alongside an intuitive grasp of psychology that encourages us, the audience, to talk 'about the beyond'".

To close this exhibition, on the last day, Saturday 5th June, at 3pm Daniel Glaser, recently scientist in residence at the ICA, will give a talk in the gallery called 'Perceiving Magic'.