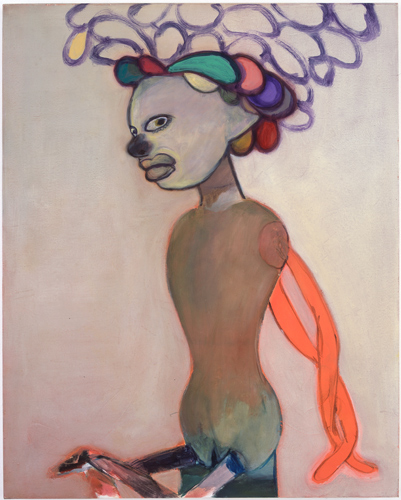 A human–insect hybrid whose expelled innards create psychedelic patterns, a Plasticine–silenced Mickey Mouse–eared demonic baby, a giant–mouthed creature whose teeth operate as a mincing plate into an oesophageal abyss. These are some of the characters you can expect to find in an Ansel Krut painting, while others stretch the capabilities of written description. Krut's works portray a world beyond the everyday comfort zone, where the social boundaries and academic theories upon which we base reality have been bent over and spanked, relativity and Darwinism abandoned in favour of a more fantastical view. The view is rarely pretty, but often funny and disturbing. Krut's dry wit and love of paint provide a welcome veneer between the viewer and a range of abject activities: a sweetshop window onto human perversity.

Between portraits, landscapes and storyboards, these paintings amalgamate the different realities we experience: the point where our internal mental processes collide with life outside. They remind us of the unspoken rules and regulations that govern society. What if we were to let ourselves off the hook of normalcy, where would the paths of our imaginations lead? Krut's realities may segue neatly in 'real' time, but converge with very different edges – his separate roles as Hackney–based painter, anonymous man on the street and father are worlds apart, yet facets of the same entity. When you attempt to unravel Krut's increasingly complex narratives, a mix of highbrow and more throwaway references to art history, graphic media and the tics and quirks of humanity form a curious queue in the back of the mind.

Krut treats the canvas as fantasy landscape, a means for both bringing to light and disguising his imaginary accounts with the stuff of paint. Often there is little or no geographic information with the ground simply serving, like a conventional portrait, as a backdrop to the subject. A strange, mutant figure sits atop a viridian box, its beautifully suggested crab legs and vibrant head plumage rendered all the more radiant against a taupe setting. Useless tangerine arms twist improbably behind a dress dummy torso. In the most recent works, the characters and surroundings appear to be developing as part of the same entity. Complex layers of panoramic strata, flesh, colourful motifs and props redirect the eye beyond the surface activity. In one large–scale work, a duck–faced creature and a balloon headed dominatrix perform sub–dom circus tricks, barely distinguishable from the gaudy big–top/kite motif that envelops them. The birdman's buff underbelly apes the hue cast by the tent/bunting shadow, while the mistress' iron–grey apparel is picked out in the warped wheel structure of the cart she rides.

We discover Krut's world through its characters. This motley demographic makes for difficult and improbable classification. They have evolved from vaudeville, corseted portrait subjects to amoral alleyway characters and amorphous maggot–riddled beings. Krut's characterisation borrows from a variety of animation, film and painting sources. Tangible objects and matter (vegetables, turds, blow–up dolls, twigs and orifices) reappear as living organisms and compositional symbols. Crude lines and improper behaviour bring to mind Max Beckman's bar scenes and Philip Guston's fag-smoking anti-heroes; animalistic, overblown features often have an early Disney, or Tim Burton feel, while patterned limbs and surface motifs give a passing wink to David Hockney's harlequins and Bloomsbury decoration. Improbable scenarios employ modern, off–the–wall cartoon irreverence (think 'Stressed Eric' or 'Ren and Stimpy') and primitively drawn props, such as platforms and wooden boxes, seem to set the scene for a veritable freak circus. Krut's use of colour is at once deliberately childlike and reluctantly sophisticated. In one image, a turd–eating character's joyfully exposed arsehole could also pass as an exquisite lilac flower.

There is an unnerving childlike knowingness about these characters – like de–programmed beings discovering themselves for the first time. Emotionally they sit between pathos and futility. Even when depicted in pairs or groups the focus remains on the individual and their personal predicament. The subjects appear shackled together, either by some physical deformity or warped narrative that forces them to inhabit the same canvas space. Sometimes they stare listlessly past us into a fictitious distance, in a trance–, drug– or dream–like state, seemingly unaware of their reality or the other hybrid creatures around them. In other instances they court attention –sometimes coquettish, sometimes insouciant – but whether serving penance or enjoying suspect activities, they appear unapologetic in the acts they commit.

Krut's recent show at domobaal consisted of uniformly sized, loosely depicted drawings. While some of his concerns remain the same in oil, the possibilities of the medium and scale of the works make the paintings a very different proposition. Each image, despite the varying speeds at which they have been produced, has a more fixed quality. There is less room to hide from Krut's unabashed visions. The hand–sized appeal of the drawings is replaced with his ever more subtle proliferation of seductive painterly touches, woven within a bold and complex visual narrative, as he continues to play mediator between good and bad taste. You could say that delving into the depths of one's imagination and wrestling with dark and difficult material is brave enough in its own right, but for Krut it seems that real bravery lies in just what you are prepared to do with the paint.