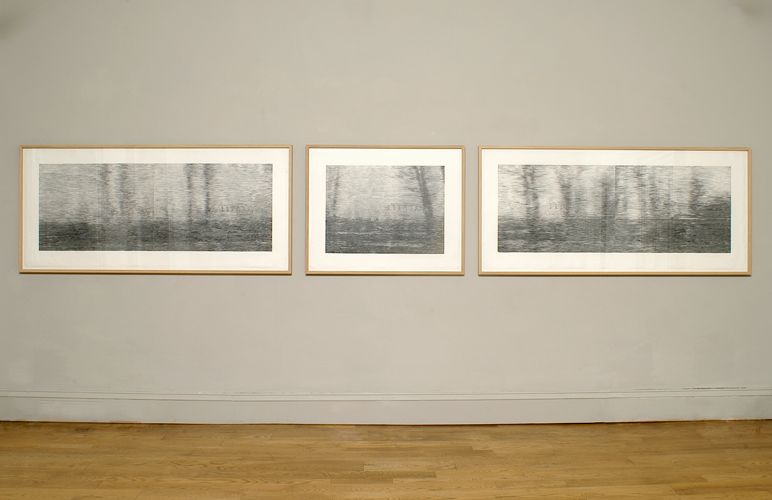 Domo Baal presents Christiane Baumgartner’s second solo exhibition in the gallery. She will show her monumental woodcut 'Tryptichon' which will be exhibited here for the first time, alongside other new works.

"Based in Leipzig, a city famous for printmaking, Baumgartner, acknowledges the tradition she springs from whilst developing an extraordinarily distinct practice. Her woodcuts, with their conceptual rigour and visual impact, very arguably are some of the most impressive art works being made in Germany today." (Jonathan Watkins, Director of the Ikon Gallery, from the introduction to the catalogue published by the Ikon Gallery, July 2005.)

The artist's vocabulary is strictly limited to the black and white lines that would normally irritate the eye when seen in a low definition freeze-framed image. At the heart of Baumgartner's work is the experience of speed and that of its deliberate pausing, with particular reference to cars, airplanes and wind turbines. She selects stills from her own video footage and transposes them, laboriously cutting into large wood plates. The juxtaposition of film as the fastest precision, and on a large scale, these lines challenge the viewer to confront the perception of his own perspective. "She fixes the state of being unfixed." Anne Hamlyn in 'Christiane Baumgartner, Speed/Standstill' Leipzig: Carivari 2003, p. 30. The menacing presence suggested by the choice of these particular machines as motifs is palpable.

Christiane Baumgartner lives and works in Leipzig. Following her studies in Leipzig at the Hochschule für Grafik und Buchkunst she took her MA at the Royal College of Art in 1999 under the DAAD scheme. Her work consists of video, artist books and woodcuts. In 2000 she won the prize at the International Triennal of Original Graphic Prints in Grenchen, Switzerland. Last year she was selected for the annual "Leipziger Jahresausstellung" for which she also won the prize. Her work is held in public and private collections in the UK, Holland, Germany and Switzerland. The Museum der bildenden Künste Leipzig will exhibit her largest woodcut 'Transall' in their newly–commissioned building due to open to the public in 2004.

The exhibition will be accompanied by a bi–lingual catalogue of 60 pages in full colour. Images, publication and further information are available from Domo Baal.