Penelope Haralambidou: The Blossoming of Perspective 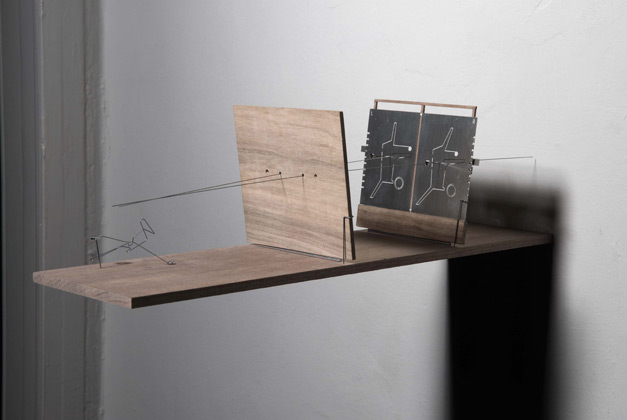 The Blossoming of Perspective is an exhibition of drawings, paintings, collages and models, studying the underlying architecture of Marcel Duchamps secret pornographic assemblage, Given: 1st the waterfall, 2nd the illuminating gas…, 1946–66 (Given).

Even in its recent digital phase, architectural drawing remains dependent primarily on orthographic or parallel projection, a Cartesian understanding of space, closely connected with the Renaissance invention of linear perspective and the monocular visual pyramid. Inspired by Jean–François Lyotards reading of Given as an incarnation, but also inversion, of the rules of linear perspective, this exhibition of drawings studies its spatial arrangement in search of an alternative understanding of visual space.

Penelope Haralambidou is an architect, researcher and lecturer at the Bartlett School of Architecture, UCL. Her work investigates cultural constructs of spatial perception, imagination and representation, she sees architectural drawing as a critical method, and her projects have been distinguished in international competitions and exhibited in Europe and the US, most notably at: domobaal gallery, London, 2006; Slade Galleries, London, 2004; Museum of Contemporary Art, Athens, 2002; and 7th Biennale of Architecture, Venice, 2000. She was a founding member of Tessera, a collaborative architectural practice addressing issues of contemporary public space through the design of exhibitions such as Athens–Scape: The 2004 Olympics and the Metabolism of the City, RIBA, London, 2003, and Heart, Art Directors Club, New York, 2003.

> download the essay 'Given: The Corridor, The Tower and The Fall…' by Penelope Haralambidou. (2 pages)

> download the essay 'Allegories of Architecture' by Jonathan Hill. (2 pages)

> download the essay 'On Being Duchamp and Maybe Alberti, Even' by Laurens Holm. (2 pages)