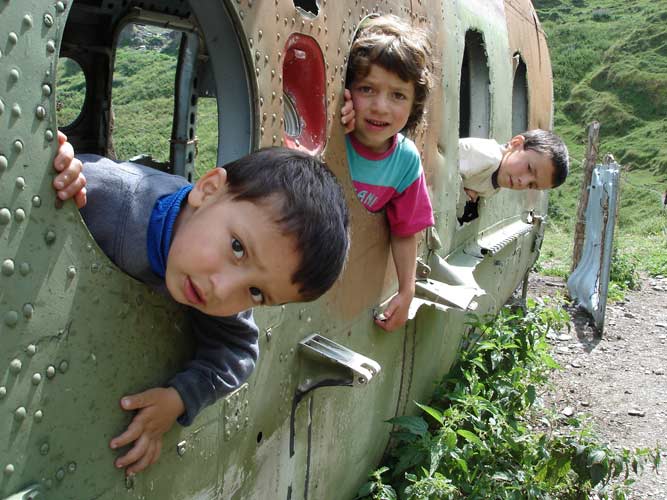 On Saturday 19 July, to mark the last day of the exhibition, and the beginning of the gallery's summer break, there will be a seminar beginning at 4pm with contributors present in the gallery. Afterwards everyone is invited to bring cake and join us for a picnic in St George's Gardens, a local, hidden, deconsecrated graveyard of note.

"This is not a just image, this is just an image" Jean Luc Godard

A perplexing mix of quantum psychics, quasi sci-fi visuals and curious lament for the demise of Lithuanian cinema. Stonys film achieves the kind of 'ecstatic truth' of which Werner Herzog is so fond. Three minutes after the big bang, here is life on earth…

Composed mostly in static shots exploring the green and gold Kiarostami-esque landscapes of a Georgian hillside and its peasant habitants; the corpse of a Chechen military helicopter sits abandoned, becoming a makeshift shelter for a variety of animal life, as well as a playground for kids. Its rusting parts blurring with nature, the wreck observes romanticised scenes of labour and rest, serving an improvised function, as well as offering a mordant reminder of Georgia’s fractious political past.

Lyrical and unashamedly beautiful, this multi award winner documents the life of a family in the Polish countryside.

A young man rides the buses, harassing fellow passengers with his over familiar chat. This compelling and claustrophobic video grew out of preparations for a stage play. As the actor spews out his pre-prepared lines, the travellers become unwitting (and perhaps unwilling) collaborators in an improvisational piece.

A reporter arrives at the homestead of a lone female farmer. Pushy and determined she drags the life story from the stoic, literature-loving worker. This remarkable observational document of a manipulated event comes from Marcel Lozinski, one of the generation of documentarists (including Tomasz Zygadlo, Krzysztof Kieslowski and Wojciech Kwasniewski) to emerge out of Eastern Europe in the early seventies. As much a film about intrusion as it is about loneliness, The Visit is awkward, vital viewing.
"To what extent is it possible to capture the truth about a man by means of a camera and a microphone. The subject is the media and the positive or negative roles they play; their veracity but also the ease with which they manipulate people.
It is about how easy it is to interfere in a man’s soul, eviscerate him, stigmatise his whole life then leave him, go away and make new films."
Marcel Lozinski

Domo Baal is delighted to present (traffic scarcely audible), an exhibition of film and video.

This screening will investigate ways of telling. The origins of each of the works selected might be considered to be in the realms of documentary filmmaking, however each work also brings to the forefront the muddy waters between a document and a fiction, or the poetic and the informative. Often when we expose the extent to which these two categories merge a certain feeling of uncomfortableness is produced. This terrain between documentary and fiction is not, as we often like to think, a line, but rather, bedrock. The two are intricately entwined, it is only a matter of to what extent this entwining is exposed to us, or else concealed and camouflaged. The question of whether we are looking at something spontaneous or rehearsed is one that we face constantly, perhaps the medium of documentary film helps us to look at why we form such questions. Perhaps when the camera allows us to experience this shift between documentary and fiction it mirrors our experience in life – whether it is in the sensations produced by a daydream or by a lie we have been living. Perhaps it can assist us in examining the question of whether it is possible to truly improvise? We are informed by so many pre prescribed elements, to truly improvise you might have to be totally unselfconscious.

While some works might take a blunt strategy of stripping away to expose the constructs of what is considered to be a ‘document’, others might touch on these issues in a more poetic fashion, skipping lightly over the notion of a documentary as a method of informing. Works included might involve our need to tell stories or embellish reality, or perhaps their focus may be on confusion and the jumbled way in which we experience existence, in relation to the complete, whole world created by a film.

What has been re–mastered or edited in afterwards? What is missing from the archive or the autobiography? What do we choose to speak of and what is best kept as a secret? What has been burnt or gone rotten? What disintegrates as we grab it from the back of the drawer or when we pull it out from the shadows? Some works might speak of our desire for documentary to reveal a secret, to show the real world or expose events as they happened. Other works might speak only in secrets and paint mysterious, visionary pictures that show the world without pretending to understand it and without tricking us into believing we can know everything.

Within this screening each work follows the common thread of portraying isolated existences whether in town or country. The aforementioned issues of documentary making are brought to the foreground in relation to questions of the portrayal of rural life or of alienated people in the city. Perhaps the intrusion of the camera becomes especially pronounced when it is turned upon a lonely figure. The cities swell by the day as people across the world leave country life behind them. As Londoners our imagination of the countryside might tend towards being somewhat picturesque.

This screening involves works from individuals in both art world and film world categories. The terrain that I speak of is occupied by individuals from both worlds due to its very nature, which also lies between categories. In making this screening the intention is to create discussion and raise questions around these issues.

Fact and Fiction: The difficult truth of artifice

Perhaps nothing could seem more opposed than the notions of fact and fiction. Whereas there is an artificial and otherworldly quality to fiction, the notion of fact is attached with scientific rigour to real situations. Facts attempt to follow a posteriori reasoning process in order to distil information, while on the other hand fictions fabricate and express spaces that may not be understood in determinate terms. At the same time, both fact and fiction aim at a translation of our conditions of existence into a means of communication; they share a common relation through their attempts to make visible what is not, to reveal or convey some essential truth.

While it may to some extent be clear how factual information relates to truth, to consider fiction in relation to truth involves a more complex operation. How can we conceive of fiction as having any real claim to truth? In classic terms fiction is bound to the artificial, to mimesis and appearance. What then are the qualities of art that would allow it a relation to truth on a par with facts?

For Schlegel, art's relation to mimesis, rather than problematise any claim to truth, was the very ground of its truth–value. He writes that through the arts' (poetry, literature and plastic) mode of expression, "we either seek an outer shell for something spiritual or we relate an exterior to an invisible interior."1

In this sense art qua representation, becomes the fragmentary revelation of eternal spiritual truths in the material world. Fiction then, as opposed to dogmatic fact, is seen as having the historical and social responsibility towards truth. Schlegel states that, "Reality lies between truth and us and continuously pulls us away from it; fantasy removes this disruptive medium and immerses us in the universe by enabling it to revolve in us like an enchanted realm of eternal transformations."2 To this extent the fictitious quality of art disrupts reality in order to expose truth. It is the means of revealing what is not visible in, and through, the material world. Language, as representation, is a material fragment of spirit, but this language is consistently at risk of a determinative stagnation that threatens its utopic potential.

For Baudelaire representation has a similar role. Rather than a Schlegelian return to an original poetic language, Baudelaire instead posits a revealing of eternal truths through art's shock of the new. This shock allows a way of recording the humdrum of existence that transforms it into something new; the artist sees the world anew like a childand at the same time is able to record this with the skill and ability of a man. Baudelaire's modernism therefore positions the painting of everyday life as the making material of eternal spirit, the infinite eternal through the transient finite. Through art's shock of the new, there is the potential "to distil the eternal from the transitory"3 without the limitations of textual determinacy.

In this sense, we have two versions of how art is seen to have a role in the revealing of truth, two variants on the mode of disruption, the romantic version of fantastical fiction and the modern version of the painting of modern life. Fiction may represent truth but perhaps only through a disjunctive relation with facts: a negative determination from what is in and beyond the material. Art as expression qua representation, as Schlegel observes, is the question of "how we reveal the spiritual materially and on the other hand recognise the spiritual in the material."4

At the same time to position art as this border between the transitory and eternal is problematic. To reveal the spiritual materially or recognise the spiritual in the material is subject to corruption. The making manifest of the spiritual in the finite material world negates its fragmentary claim to truth when the shock of the new dissipates into the sameness associated with the old. Without the radical possibilities of shock (even as the otherworldly quality of romantic fantasy) the revelation that art positions any claim to truth is compromised. To structure any rule of shock perpetuates eternal similarity as opposed to eternal transformation. Instead, for art to retain any potential for disruptive revelation, it must retain its ability to shock, to suspend determinations. Only by and through fictions oppositional play to fact can it retain this ability. Rather than a paradoxical rule, art survives by the rule of paradox, the conjunction and disjunction of fact and fiction, the making fiction of fact and the making fact of fiction. By operating in this strange terrain art may still appear as a revealing space of contemplation.