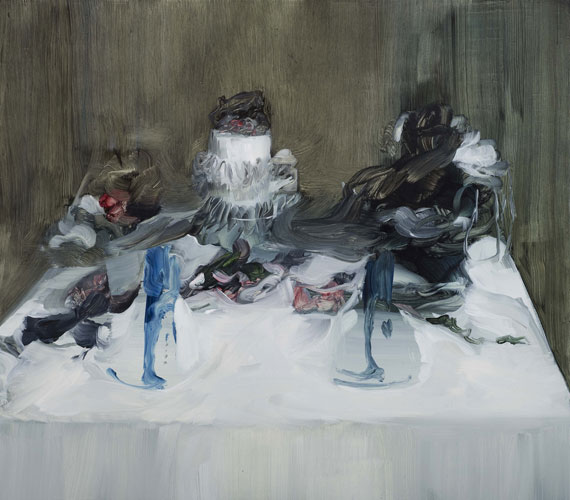 Domo Baal is delighted to welcome Lara Viana to the gallery programme with her first solo show.

" … When taking in these works one can't help but think about how the photographic object has been previously handled in paint, by the likes of Gerhard Richter or Luc Tuymans. They radiate a peculiar energy that sits somewhere between the fuzzy warmth of recollection and the alchemical mystery of the re–dimensionalised subject. Viana appears at home within the representational hall of mirrors that connects the world of painting with that of imaging, drawing one's attention to the innate human desire to render things realistically and the ways that new technologies fracture our understanding of reality. Where Richter's and Tuymans' blurry re–contextualisation of familiar and mass–media imagery are associated with particular political themes, Viana hovers between the time–based evidence of an unspecified event and its fictional (mis)reading as if stage–managing fragments of a baroque drama. Her paintings may be more about the workings of the mind than the media machine but, like her predecessors, she appears alive to the difficulties of extrapolating one from the other.

It is no surprise, then, that Viana cites Velazquez as an influence, particularly when it comes to her chromatically complex interiors out of which social situations, or the aftermath of them, seem to have grown like soft–tissue attachments. So, too, her reductive approach to technique – Viana applies, moves and erases oily umbers, ochres and blues around and from the ground as if hesitant to pin the image down. Ever since her Royal College days, Viana has been making works in which the potential elements of a story appear to emerge, low–relief, from matter. The lurid gaseous compositional quality of her earlier paintings has given way to a more sophisticated set of mid–tonal propositions, the slippery smears of organic hues reminiscent at points of bodily fluids on glass – biopsy slide evidence of the painter's uncanny ability to describe space and the passage of time.

The most recent series of table paintings, still lifes of table tops literally writhing with dinner party detritus and rudely cropped like outtakes from a film reprographic project, push the subject/context dissolution further still. Despite the chaotic melding of objects and interiors, one is never allowed to get lost in each frame on account of areas of sharp linearity – the crisp edging of laundered linen and the encroaching presence of brushstroke walls – but directed as if to experience the shift that occurs as the familiar yields something unexpected. As with other of Viana's series, one is left to situate oneself between the layers of the representational onion, the metaphorical distance from the table. As a group, they make visible the subjective discrepancies between different human accounts on a single event, the treacle slide of time between one perfunctory moment and one of significance.

Viana's delectable, yet disquieting studies for a mental picnic open up many byways between personal and public territories: the influence of cultural production on the content and stylistics of memory, at every level. But back in the studio, and drawn into a Viana Rorschach–image conundrum, one remembers that these works are as much about the nature of living as the removed technical recording of it. Her curious handling of the half–remembered comes as a result of serious real–time observation, an acute sensitivity to the manner in which light alters objects and situations. And as one watches an eggy ovaloid visage melt into a mirror holding a secret interior, it's hard to care about the chicken. … " Rebecca Geldard, an extract from her essay for Lara Viana's exhibition at Phoenix Arts, Exeter, in June 2009.

Lara Viana was born and brought up in Salvador, Brazil. She graduated from the Painting Department at the Royal College of Art in 2007, was selected for New Contemporaries in 2008 and the Whitechapel Gallery's East End Academy 2009 – The Painting Edition as well as a solo show at Phoenix Arts, Exeter. Lara Viana is also currently exhibiting in 'Psychic Geography' at Workplace Gallery, Gateshead. Rebecca Geldard's essay will be published with images as a pocket–book by domobaal editions, and will be available from the gallery.