Sharon Kivland: I am sick of my thoughts 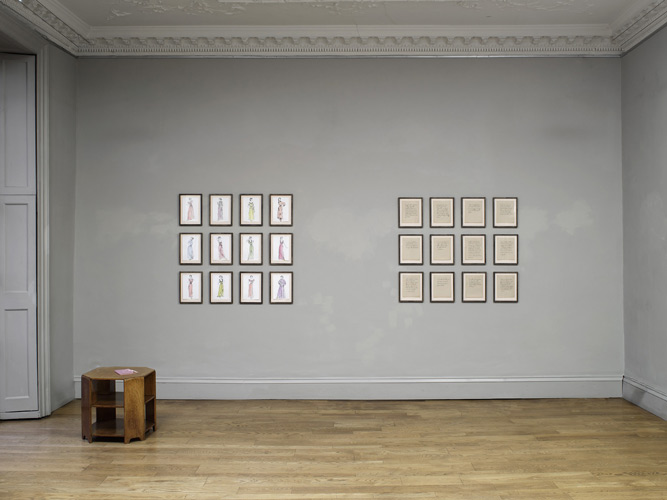 Domo Baal is pleased to present Sharon Kivland's second solo exhibition in the gallery. Kivland will exhibit recent works that draw on her archive of magazines, prints, publicity leaflets or objects, postcards, and advertising from different eras. Kivland employs the movement and displacement of ideas, words, images, and objects. Connections are woven in series, using strategies of appearances, disguise, impersonation, vulgar and faithful copying, subtle dialogues, intimate suggestion, and a lack of historical fixity. Working with reproductions that are in their turn reproduced and reworked, Kivland's approach is that of the amateur and collector, doing her very best with diligence and dedication. There is affection as much as irony in the works, often displayed in the titles, which reveal appropriation and the claiming of possession. There is also fatigue, insufficiency, and failure. Daniele Robert–Guédon writes:

It would be in vain to attempt any classification, to wish to assign definite propositions, to the work of Sharon Kivland. It is not that the work is hermetic or obscure, to the contrary indeed, but rather that the range of references that precede the work's realisation is so dense that drawing out the slightest thread lead to an infinite reflection. Nonetheless, we could approach the work by considering the idea of displacements, whether these happen to be errancy, detours, passages, or equally metaphors, ellipses, metonymns.

These are studio works, including works on paper, prints, photographs, and watercolours, made over the last two years in a state of malaise. They are works of interrupted thought. The artist writes that she is sick of her thoughts, and copies her son's concordance as he observes 'elle est malade de ses pensées'. A photograph of a woman lying back, her hair falling in an unlikely mass is countered by a text work in which Zola's novel Nana (a favourite recourse of the artist) has been digested according to light and lighting effects, including those of metaphor. It ends with the line: The hair, the beautiful hair, still blazed like sunlight and flowed in a stream of gold. Nana is a grotesque corpse at the end of the novel, and it is true that the photograph has an unhealthy cast. The artist practices her limited skills in watercolour, copying carte de voeux, which show the similar scene of snow, a river or stream, a forest, a village. She looks at the banal image for a long time, committing it to memory, then turns it over to look at it no longer, rendering then what she imagines was pictured overleaf. The watercolours are framed with their original, reversed to show the message, a wish for health, for a lovely year. These, she will say, are her good years. 1968 was a good year, too, and she is equally fond of 1848, 1871, and some years in the 1950s, working from her collection of French women's magazines, published at particular moments of insurrection or social change. Pictures are isolated from their backgrounds, reprinted, then coloured as faithfully as possible according to their original colour, which becomes a strange 'maquillage', or indeed, in Joan Riviere's term, a masquerade. And masquerade is a play on the imaginary, subject to the market of sexuality, which masks the object. They become grotesque, even though she tries to work as carefully as possible, really doing her very best not to spoil them, like a teenage girl in her bedroom (colouring in her idealised drawings of what she may wish to become). She stops when she finds herself applying too much colour, in too garish a shade, but a discrete application seems sadly insufficient. Nonetheless, she arrests herself at the point of violence to the image. A supposedly enticing picture (a woman lifting her hand to her face, turning her head, her hair flicking back in the other hand), however banal, is very easily turned into something ugly and clumsy, yet retains or reconstitutes a horrible attraction. It is monstrous, of course, in its overdone appearance of femininity, and each betrays something in its intersection with history. She imagines that her works are made with both care and taste, that they are discretely knowing with just a soupçon of intellectual quality, moderated by a soft, persuasive voice, with a harmony of style and discourse. Catherine Elkar writes of Kivland's work: