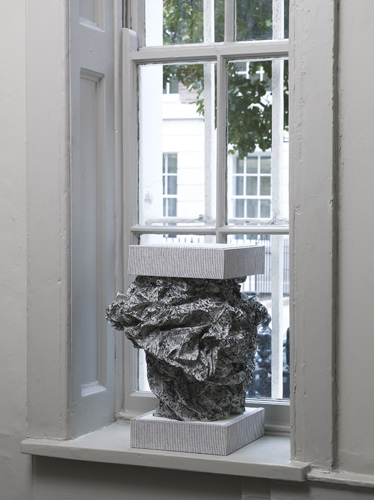 Domo Baal presents Rachel Adams' first solo exhibition in London. Adams' work can also be seen in 'Look with all your eyes, look' at the Frith Street Gallery in London this summer. Adams is interested in the relationship between women and sculpture in mythological tales such as Pygmalion and Medusa. At the centre of both of these myths is a female protagonist who can overcome the static restraints of sculpture: be that either breaking from a rigid marble form to become living breathing woman as with Pygmalion, or indeed the reverse as with Medusa who transforms the living into motionless statues. Fusing furniture design, textiles, the iconography of classical ruins and decorative craft finishes, Adams' objects pay tribute to the classical tradition of figuration: the bust, the reclining nude and the caryatid. These forms are blueprints for the depiction of the female figure within the sculptural canon in use from Ancient Greece to mid–twentieth century biomorphic abstraction and beyond.

Drawing on myths and traditional motifs, Adams plays with the identity of a sculpture and its relationship to both traditional materials and museum structures. In her new body of work, the plinth is developed well beyond being a mere support and becomes integral to the work being crafted to the same extent as the sculpture – fudging this loaded art–historical hierarchical relationship. Drawing, craft and furniture materials, paper, yarn, tubular aluminium, fabric, ink and starch are used to make associations with traditional sculptural techniques such as modelling and casting. Ink–saturated and hardened paper folds suggest classical marble drapery, striped fabric becomes the columnar fluting and crumbling ruins are conjured up by crumpled paper forms. Her choice of materials, subverting their intended office, domestic, DIY or industrial origins, whether they form a lumpen bust–form sitting atop a wonky, legged plinth or a shiny metal structure bedecked with pompoms lend the work a surrealist sensibility.

Rachel Adams makes sculpture that is concerned with the liberation of materials from the constraints of their conventional properties. Most of her work is made out of paper – photocopier paper, wall liner paper, paper plates.

One of the most fundamental characteristics of any piece of paper is its flat, double–sided surface, a surface disrupted by Adams's acts of shredding, folding, scrunching or crumpling. Paper is also thin and light, and perhaps relatively a–historical, but in its transformation into sculpture, Adams gives it mass and a concentrated presence, an almost animal–like vitality and a history ¹. 'Crumple' (2010) is ready to whiz away on casters; 'Landed' (2010) has indeed landed, but is positioned to take flight again at any moment.

Anthropomorphism aside, Adams' attitude to materials is direct and visceral: labour and craft are critical to her practice. She prefers to make things herself, occasionally integrating into sculptures found objects such as curtain rings and tent poles. Adams uses readily available, inexpensive materials and equipment, including photocopier paper, paint and office shredders. Coloured photocopier paper has a particular sheen, palette and weight; Adams often applies gouache to flatten out the material, later shredding or folding it. Larger work is made out of brown paper that is also often painted.

Although abstract, Adams' work is at home in a domestic environment: it is similar in scale and sometimes in form to furniture, although it does not function like furniture. In fact, the work fails to function at all. Its dissimilarity to functional objects, and its complete lack or denial of functional potential, rather than its dysfunction (its potential to function that ends in failure), distinguishes the work and makes it compelling. Its visual associations are multifarious and open–ended: sculptures can look like pairs of vintage clocks or sets of eyelashes, as in 'Golden Years' (2009). In 'Polar' (2009), a composition of tent poles, curtain rings and pink ribbon do not allude to a familiar object, yet the individual elements convey a range of affinities and possibilities.

Adams confounds the desire to locate the work's primary meanings in some sort of functional capacity. One of the founding philosophers of phenomenology, Henri Bergson wrote about the experience of any object in terms of its relationship to function: "To recognize a common object is mainly to know how to use it. This is so true that early observers gave the name apraxia to that failure of recognition which we call psychic blindness"². Adams' work presents an amalgamation of resemblances resulting in a response akin to psychic blindness – an inability to identify the object in relation to function which grants the work its own beauty and authority.

¹ Adams has said that she is interested in the "a–history" of paper. Personal communication, March 2010.

Rachel Adams first exhibited at domobaal in 'Time is a Sausage (A Show of Shows)' in 2009 and at the London Art Book Fair in 2010. The gallery is delighted to present 'Cut from Whole Cloth' which marks Adams' first solo show in London. Rachel Adams is based in Edinburgh, she studied Fine Art at the University of Edinburgh and Edinburgh College of Art. In 2009 Adams was awarded a Visual Art Creative and Professional Development Grant from the Scottish Arts Council and a Visual Arts and Crafts Award from Edinburgh City Council. Exhibitions include: 'Marble mouthed' The Duchy, Glasgow; 'Ekkert Nytt Undir Solinni/Nothing New Under the Sun' Skaftfell Centre for Visual Art, Seydisfiordur, Iceland; 'Blind Alchemy' Royal Standard, Liverpool and Studio Warehouse, Glasgow (all 2010), 'New Work Scotland' Programme (solo exhibition) Collective Gallery, Edinburgh (2009/10); '_' Satellite, Newcastle; 'Time is a Sausage (A Show of Shows)' domobaal, London; '4 New Sensations' A Foundation, London (all 2009) and Catalyst Art Annual Student Show, Catalyst Arts, Belfast (2008). Forthcoming exhibitions include 'Look with all your eyes, look' curated by Susanna Beaumont at the Frith Street Gallery from 15 July until 30 September 2011. in October Adams will take part in an invited panel discussion at The Fruitmarket Gallery, Edinburgh on contemporary art and its relationship to Feminism.