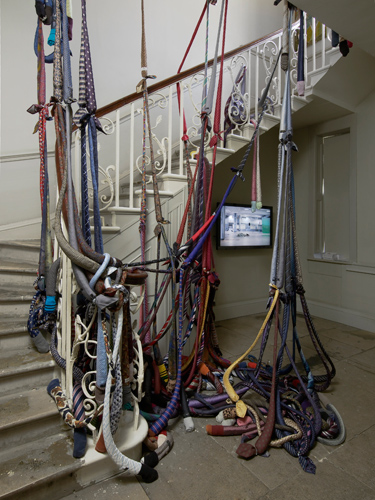 Domo Baal is delighted to present an exhibition of new work by Ailbhe Ní Bhriain, Mhairi Vari and Damien Flood.

'LOL memory' a monumental sculptural installation by Mhairi Vari will welcome all who enter the gallery, cascading thirteen metres vertically while contorting with lithe abandon through the architecture of 3 John Street (20 years short of its tercentenary). 'LOL memory' functions here as portal rather than portico and negotiates the way between and towards an installation of paintings by Damien Flood and video by Ailbhe Ní Bhriain. These diverse practices set up a three way conversation around the expansive idea of landscape; all three artists situate their work firmly within its concerns, whether in the topographical sense or in respect of the reverberating echoes of the history of painting. Embedded in this is a shared interest in the slippery nature of language and of representation.

Damien Flood situates his practice between fact and fiction. These paintings are modern landscapes that reference the history of painting with an underlying fantastical element. A fleeting familiarity can be found in the work that is soon replaced by an ambiguous questioning. Gathering imagery from varied sources, Flood is particularly interested in the research trips of the nineteenth century that explored the oceans and 'new territories'. The illustrations gathered on these voyages evoke an otherworldly feel; although they are of actual plants and creatures, they contain a mystery and scepticism. It is this notion of the undiscovered, the other, the foreign landscape that Flood searches for within his practice. Alternative geographies are proposed on the basis of speculative philosophical and physical theories and myths. These paintings are conversations (figurative and abstract) on the dichotomy between our understanding of the civilised world versus our understanding of nature, between real and imaginary and the slippages in–between. They attempt to describe how we visualize the unknown and engage the viewer in seeing the world anew. Within his practice he marries abstraction with representation, elegant phrases with mute absence, meaning with nonsense, questions with more questions.

Damien Flood lives and works in Dublin and graduated from the MA in Fine Art at NCAD, Dublin in 2008. His work was selected for the John Moores painting prize in both 2008 and 2010. He is currently exhibiting in 'Café Paradiso' at Arthur Boskamp–Stiftung in Hamburg from 17 March to 5 May 2013.

Ailbhe Ní Bhriain's practice takes Irish landscape as its ground but sets out, through intervention with pictorial space, to create a new ground – one in which the dimensions of time and place are out of joint. In her new two–part video work Ní Bhriain uses the archetypal visual devices of doors, gates and windows to frame an exploration of passage and of place in–between. Characterised by scenes resembling half–constructed sets and by the motion of slow, extended tracking shots, the work continues Ní Bhriain's interest in the constructed nature of the image and in the slippage between 'here' and 'elsewhere' inherent to representation – articulated as the tension between the real and the illusory or between surface and depth. This tension is explored through forms of montage, which both expose the mediated nature of the image and suspend the viewer in a gesture of displacement. The work has drawn, in terms of its locations and thematics, on aspects of Antonin Artaud's ill–fated 1937 trip to Ireland, a journey which began as visionary pilgrimmage and ended as an episode of degradation and deportation. Of interest is the idea of an expansive vision of place come–undone and the question of what remains when the ideal has been fragmented by its collision with the real. This resonates with issues affecting contemporary representation of landscape: namely, what remains possible in the aftermath of the pictorial and philosophical certainties of the past? Running through Ní Bhriain's work is an acknowledgement of brokenness; it relies on sets and props, substitutions and place–holders, which both allude to the grand themes of landscape and reduce them to a series of aspirational gestures. Within this, however, a fluid, associative visual language is created, which looks to forge a relationship between internal and external worlds.

Ailbhe Ní Bhriain lives and works in Cork, Ireland. Ní Bhriain's work was recently included in 'Motion Capture' at the Lewis Glucksman Gallery in Cork, and she is currently working on a new seven–part video work commissioned by Dublin Sound Lab for Kaija Saariaho's composition 'Maa', to be performed as a series of full concert productions in 2013.

Mhairi Vari's practice routinely reanimates discarded possessions, the utilitarian gadgets of our daily lives and redundant technologies to create conceptually rigorous works that confront the boundary between sculpture and installation. In her new work 'LOL memory' Vari uses the worn, luxurious (almost too) colourful silk ties to form a skeletal structure that appropriates coreropememory (crm): the read–only memory (r–om) once used in the Apollo guidance system. As digital components of once cutting–edge technologies are rendered redundant by perpetual development/progress, so silk ties, symbols of societal status, are fast becoming a hangover from a bygone era. 'LOL memory' has no real limits and scarily contains the potential to grow exponentially in the same manner as the scientific principle that dictates its form. This rapidly expanding sculpture results in an intensity of clashing patterns, colour, and texture forming a chaotic yet intricate jungle. Dead ends present points of clarity where the structure allows clumsiness and randomness as well as elegance and potential to be revealed. The exactitude of computer science is translated into a simple and organic process for coreropememory's construction: a series of binary connections form a bifurcating system that results in a natural arboreal form. Like Linux distribution there is no formal end to this piece; it will only ever be a fragment of something potentially infinite.

Mhairi Vari is Scotland–born and London–based. 'LOL memory' was recently selected as an artist's project for ART13 London in March. Vari is known for her sculptural work that investigates aspects of physics and information technology using material from industry, DIY and the domestic everyday.

We would like to thank the Arts Council Ireland/An Chomhairle Ealaíon, Culture Ireland/Cultúr Éireann and The Cork Film Centre and Green on Red Gallery, Dublin for their generous support of this exhibition.