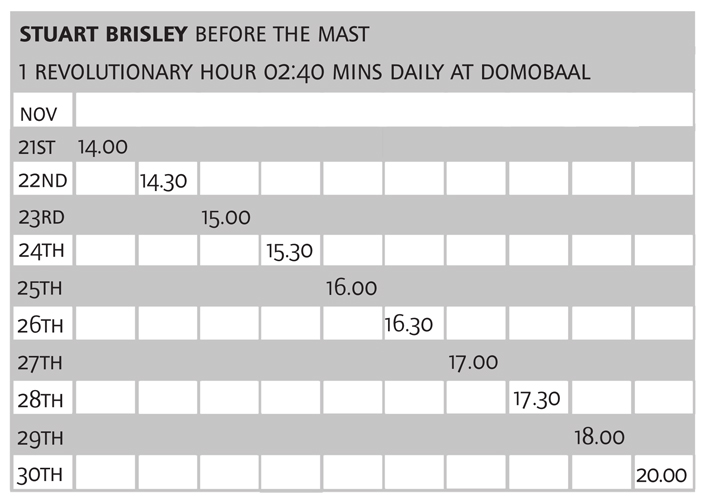 (image: Stuart Brisley 'Before The Mast' performance timetable for 21–30 November 2013 at domobaal)

Stuart Brisley has been an important figure in British art for sixty years. He is best known for the series of key performance related works created in the 1970s and 80s that re–defined what 'performance art' might be and encompass. Brisley used his body as a metaphorical and allegorical site to enact and comment upon how the individual situates him/herself between authority and freedom. What is often forgotten, however, is how long Brisley has been creating innovative work and the importance to his practice, alongside performance, of painting, photography, sculpture, video and drawing. His is a combative art involving the politicisation of the body, and is imbued with a deep understanding of how rituals function in society and can be used to produce insights into the way that society operates. Today, at a time of increasing social and economic polarisation, Stuart Brisley's critical examination of the political status quo, and his critique of societal norms and prejudices, is as relevant and compelling as it ever was.

Opening on 4 October, the exhibition at domobaal will feature a suite of four paintings on paper made between 2010–11 and collectively entitled Jerusalem. These works originated in a consideration by Brisley of William Blake's poem of the same title and of the use, as kind of second National Anthem, of Hubert Parry's famous musical setting of Blake's words. The paintings are of landscapes, but not the lyrical ones of an idealised, hierarchical England associated with the Parry setting. Brisley depicts undergrowth left to its own devices, pits and pools of stagnant water. The one hint of lyricism is the sun shining on a distant hilltop, but even here the field in the foreground is in deep shadow. Blake's apocalyptic egalitarianism seems a long way off. Brisley describes the paintings as "interpretations of that future which we are living in".

The exhibition opening at Mummery + Schnelle on 16 October will consist of two parts. The first is a set of twenty photographs made as part of a performance work entitled 12 Days that was created at the Kunstforum in Rottweil in Germany in 1975. Over a period of twelve days Brisley built, and made a series of interactions with, a box-like structure that reflected the limits of his own body. It came to resemble a kind of cage, as if he were making his own prison. The final act of the performance was for Brisley to break this structure apart. The structure was built in private, but Brisleys interactions with it were carried out in front of an audience. A concern with measuring a space in which things are done using the human body as the measurement unit and device, and the relationship of the performed actions to the presence of the audience, are key components in Brisleys work.12 Days is an important example of a performance from the 1970s in which these issues were worked through and explored. The photographs in the exhibition at Mummery + Schnelle should be seen as an integral part of the original work, not merely as documentation of it. They contribute to and reinforce the social and artistic experience that was generated. Brisley has called them visual restructuring and a form of creating news. The views from which they were taken, and the episodes that they recorded, were carefully chosen. The photographs were taken by Leslie Haslam, who also helped Brisley build the structure used in the performance.

The second part in the Mummery + Schnelle exhibition is a suite of three paintings made between 2011 and 2013 which complete a work entitled The Missing Text. This began at the Peer art space in London in May 2010. Brisley took up temporary residence, as his alter ego RY Sirb the curator of ordure, over a ten–day period in an abandoned shop that Peer was about to take over as an extension to it's exhibition space. The shop was discovered to be full of the detritus of three failed businesses, which reminded Brisley of the Conservative Party's 'Broken Britain' 2010 general election slogan. The period of Brisley's residence and actions at Peer coincided with the negotiations to form a coalition government after that general election, and the implications and consequences of these run as a kind of leitmotif through the work as a whole. The title, Missing Text, refers to the unspoken subject of the work, the elephant in the room: the British monarchy. The Missing Text consists of a diary written at the time of the original actions, a set of photographs of those actions, a film, and the three new paintings. The paintings are variants based on the photographs and were made consecutively showing influences from one to another. They replicate some of the procedures of the ten–day action – the piling together of the detritus of the empty shop into a colossal heap – by taking images from different photographs and forcing them together into ill–fitting relationships. The use of detritus and the discarded objects of human activity has been a characteristic of Brisley's work over the years. For him they are the residue of outmoded operations and institutions and he uses them as symbols of these.

As the final part of the two exhibitions Brisley will create a new ten–day performance work at domobaal gallery from 21–30 November. It will be entitled Before the Mast. The dates of this performance correspond to the month of Frimaire in the Republican Calendar that was introduced in France after the French Revolution. This calendar established a new chronology and was an effort to sweep away history and a centuries–old religion–centred organisation of time. The seven–day week was replaced by a new ten–day decimal week called a 'décade', with ten–hour days and 100 minute hours. Brisley's new performance will take place during one 'décade' with each daily action lasting for one Revolutionary hour. Body, time, politics and ideology will all be combined.

A new series of monographic publications are being published by domobaal and Mummery + Schnelle. These seven new books launch an ongoing publication project on Brisley's work. Each are: soft cover, offset printed, 26.6×20.6cm, fully illustrated and focus on a single body of work as follows: Jerusalem (2011–12), The Missing Text (2012–13), Homage to the Commune (1976), 12 Days (1975), Hille Fellowship Poly Wheel (1970), Photography (1988–91), Before the Mast (2013). The series is published in an edition of 300 sets, of which 100 sets are available numbered and signed by the artist, presented in a clothbound slipcase made by the Book Works Studio. Titles will also be available individually.

Mummery + Schnelle and domobaal are also presenting a solo exhibition of Brisley's work at Artissima, Torino 8–10 November 2013. This will focus on photographs taken as part of a performance entitled Homage to the Commune, created in Milan in 1976. Stuart Brisley's Hille Fellowship Poly Wheel (1970) will be re–constructed, commissioned for an exhibition curated by Julieta González, by invitation of Artissima at Fondazione Merz, Turin, Italy called 'Ways of Working: the Incidental Object' from 07.11.13 – 12.01.14. In September/October 2014 Brisley's work will be the subject of a major survey exhibition at Modern Art Oxford. Stuart Brisley's work 'ZL636595c' (1972) in the Tate collection is currently on display at Tate Liverpool as part of DLA Piper Series: Constellations.