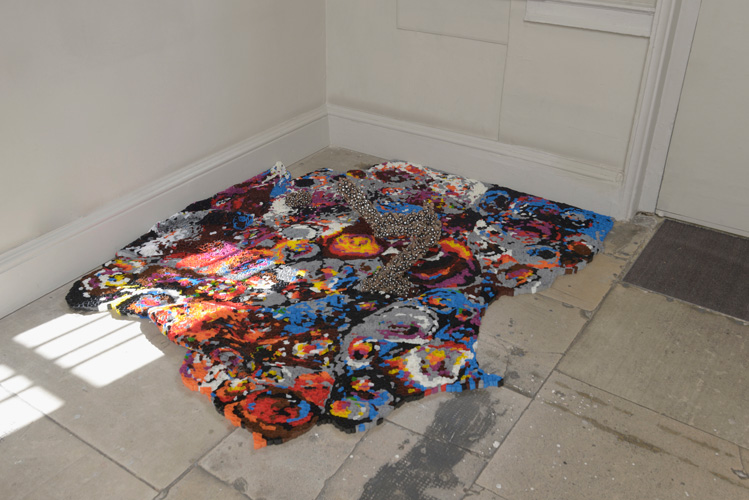 Domo Baal is delighted to show two solo bodies of new work, paintings by Lara Viana and a sculptural installation by Mhairi Vari. Two practices are presented here side by side that share an affinity of ideas and are both equally committed to developing an open vocabulary – images that could be said to be still in the making, placed on pause for the time being at their author's whim. These works are more concerned with negotiating their own indeterminacy than cognitive proposition or interpretation.

Lara Viana presents twelve new paintings in oil on wood, made in her studio in Salvador, Brazil over 2015–2016. Vianas paintings revel in wriggling out of any definition applied to them. The original focus of the artists gaze is as often a found image as it is a view from the streets around her studio, 'surrounded by baroque decaying buildings taken over by vegetation and overshadowed by the continuous growth of surrounding high rises', or a moment of light diffused through the ancient city centre where she currently works. Salvador, sometimes called 'Roma Negra', lays claim to being the oldest city in colonial South America. Sometimes the images that are the point of departure for Viana's work are still discernible; sometimes the process of deconstruction and transformation obliterates all vestiges of the original. Memory and experience, suffused with diffused light and timeless hauntings, are evoked, absence and presence side by side.

Mhairi Vari presents a new sculpture: default mode network, composed of acorn caps, bitumen, polystyrene beads, electrical tape, wireless optical mouse and a satellite dish bracket. The more or less accidental discovery through the pauses in activity while observing functional magnetic resonance imaging (fMRI) of brain activity led to the discovery of the 'default mode network' — a resting state brain network that jolts into activity when the mind is not focused upon conscious or 'goal' oriented activity. This complex mode of thought operation is considered crucial to healthy functioning — an interesting proposition when, in contemporary conditions, the pace of things means time to reflect is so often interrupted with digital distraction and the pressures of 'achieving' quantified tasks.

Vari is interested in establishing a set of conditions that support the necessity for unknowingness and uncertainty in the facture of art. Toying with the philosophical proposition of the rhizome offers a 'structure' (or anti–structure) that goes some way to describe the often un–nameable, intangible processes required for the production of art. In taking the rhizome as a basic principal for consideration in the generation of physical work Vari engages with emergent process rather than construction by design. The ideas and processes for generating art are not separable into constituent parts but exist in symbiosis. default mode network consists of hundreds of thousands of bits of electrical insulation tape stuck together in loops, formed by stochastic process and encompassing a degree of unpredictability.