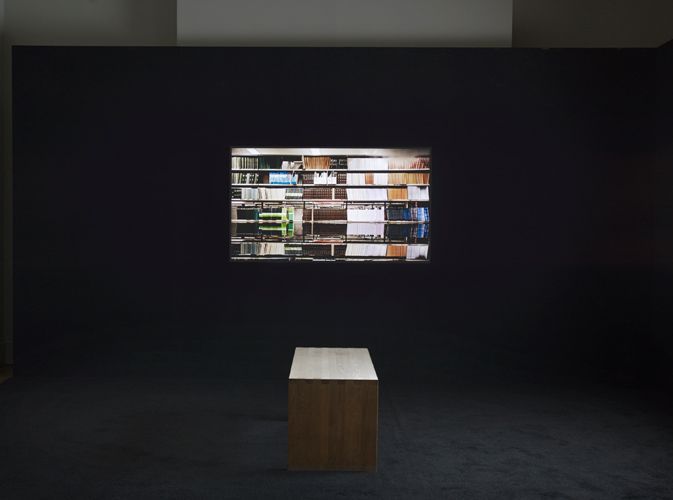 (above: Ailbhe Ní Bhriain 'Reports to an Academy' (2015) installation view at domobaal, photograph by Andy Keate)

Domo Baal is proud to present 'Reports to an Academy' Ailbhe Ní Bhriain's third solo exhibition in the gallery. This exhibition is produced in collaboration with The Dock in Carrick–on–Shannon, Leitrim, Ireland, and presents a four–screen film installation 'Reports to an Academy' as well as a selection from the on–going photographic series 'Inscriptions' (full list of works below as a pdf).

'Reports to an Academy' takes its title from the Franz Kafka short story 'A Report to An Academy'. In the story an ape recounts his deliberate acquisition of a human identity as a means of survival in the aftermath of captivity. The work takes this idea of identity as performance and explores it through multiple locations: an archetypal West of Ireland landscape, a natural history museum, an artist's studio and a library. It questions the assumptions around authenticity and representation suggested by these locations, with each setting ultimately revealed as being equally mediated. Using film and computer–generated imagery, landscape, museum, library and studio are reimagined as stage sets in which identities might be constructed and false realities forged. 'Reports to an Academy' is staged as a four–screen installation. The four films are looped and of varying length, creating a changing set of image combinations. A single soundtrack links all four screens.

The photographic series 'Inscriptions' continues the practice of combining imagery from disparate sources – in this case museum artefacts, expansive landscapes and studio debris. Simple collage techniques are used to collapse the binaries and conventions of the source imagery in order to imagine a series of new and permeable connections. The work takes its starting point from a text by Samuel Quiccheberg entitled 'Inscriptions of the Immense Theatre'. This is the earliest published text on museology and outlines the methods for the collection and categorization of objects, images and artefacts from across the world. The collection or 'theatre' is defined as 'a repository of artificial and marvelous things' and is intended to operate as a stand in for 'the globe in its entirety'. In contrast to the presumptions and aspirations of the original text (which clearly speak of an imperialist western agenda), this series imagines a theatre of aftermath – one in which the categories and certainties espoused by Quiccheberg have broken down and where narratives must be constructed anew from the fragments of representation.

Forthcoming exhibitions include a solo exhibition this Summer as part of the Galway International Arts Festival, directed by Paul Fahy, Galway, Ireland, (17th to 30th July) and a solo exhibition at Temple Bar Gallery in November 2018.

Recent solo exhibitions include 'Ailbhe Ní Bhriain' at The Dock, curated by Sarah Searson, Illuminations Gallery at Maynooth University, County Kildare, curated by Aoife Tunney as well as a two–person presentation with Aisling McCoy as part of New Irish Works at The Library Project, Temple Bar, Dublin, Ireland – all 2017. In 2012, her previous film series 'Great Good Places' was selected for 'After the Future' the EVA International Biennial, curated by Annie Fletcher in Limerick.

In December 2015 the RHA in Dublin premièred 'Reports to an Academy' curated by Patrick Murphy and also published an accompanying monograph, which includes an essay on Ní Bhriain's work by Caoimhin Mac Giolla Léith and is available from the gallery. In 2016–2017 films from Ailbhe Ní Bhriain's 'Reports' were included in '2116 – Forecast of the next century' a group exhibition curated and organised jointly by Fiona Kearney and Chris Clarke at The Lewis Glucksman Gallery, University College Cork, Ireland (in 2016) and Caitlín Doherty at Broad Art Museum, Michigan State University, USA (2016–2017).

Ailbhe Ní Bhriain and Domo Baal would like to thank the Arts Council of Ireland/An Chomhairle Ealaíon, Culture Ireland/Cultúr Éireann and Sarah Searson and staff at The Dock, Leitrim for their generous support of and close collaboration with this exhibition.

>Ailbhe Ní Bhriain at The Dock

>Shrouding to Make Visible, by Joanne Laws, Arts Writer in Residence at The Dock (pdf)