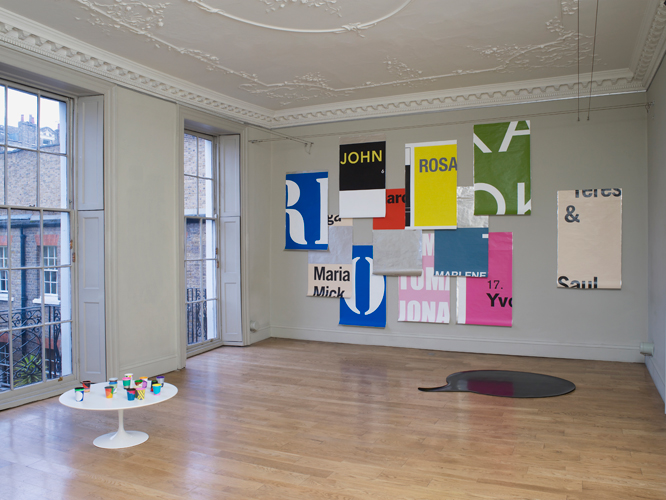 Domo Baal presents Lizi Sánchez's second solo exhibition in the gallery, 'Maria, Rosa, Mick & John' an installation of new large format works on aluminium foil that hang loosely on the wall, their lower edges flicking up as if hastily fly–posted, overlapping and partially obscuring, while jostling each other for attention. They reflect on art exhibitions during 2016 and 2017 that were promoted through the prism of leading art magazines. These works extract and juggle selected text using acrylic paint on industrial laminated aluminium foil. The foil substrate is most often used in the food and medical product packaging industries and is a material that Sánchez has become well known for working with for a while, combining her interest in materiality with her ongoing investigation into modernist abstraction. Details are cropped from exhibition advertisements, faithfully replicating the colour and typeface of their sources. In this way, all aspects of the original intent and design are at once honoured, while their primary purposes are rendered powerless. We are offered mere fragments of contemporary art's responses to the present while also highlighting art market hierarchies and strategies that might be expressed via a particular visual identity and distinctive graphic style.

Sánchez's practice has consistently investigated the dichotomy between surface and meaning through material, colour and form. Luxury consumer packaging might, for example, be a starting point for a work that looks into the visual seduction of the aesthetic of Modernism, while being emptied of its ideology and ideals.

And then, turning away from high–end glossy luxury art magazines Sánchez also presents 'Everyday', a body of work that focuses her attention on our personal daily routines and habits using disposable coffee cups (biodegradable naturally). By sampling and usurping details, colours, patterns and graphic identities from toiletries, condiments etc and other packaging from our urban environments, she creates abstract compositions and plays a game of casual geometries in painted colour on paper cups.

Lizi Sánchez graduated from Goldsmiths MFA in 2007 after completing her BA in Lima, Perú, where she was born. In 2010, she was selected for Studio Voltaire's Members show SV10 by Jennifer Higgie and Rebecca Warren, in both 2011 and 2013 the Creekside Open by Phyllida Barlow and Paul Noble, in 2015 the Whitechapel Open and in 2016, both John Moores Painting Prize 2016 and Sculpture in the City 2016. Earlier this year she presented her second solo exhibition in Lima.

>Rebecca Geldard: Beyond The Pearl 2012

>Eliza Williams: Beyond The Pearl 2012