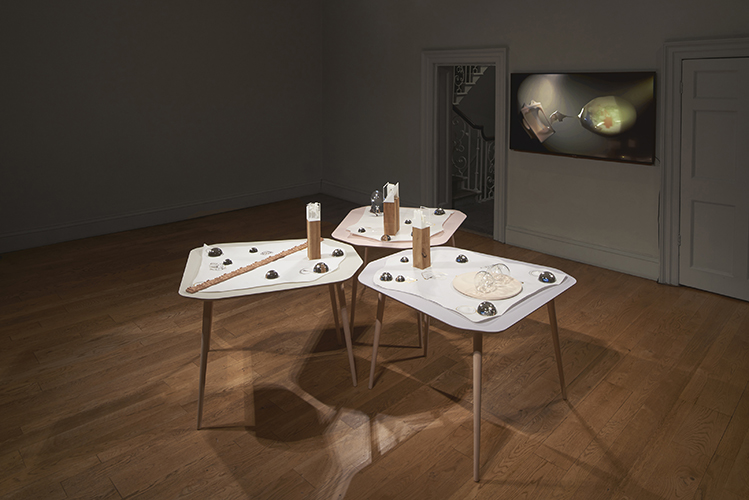 Penelope Haralambidou's project 'City of Ladies' studies 'The Book of the City of Ladies', 1405, by Italian/French medieval author Christine de Pizan (1364 – c.1430). The text is part of a compilation assembled for Queen Isabeau of Bavaria between 1410 – 1414 (Harley MS 4431) the largest surviving collected manuscript of her works and one of the foundation manuscripts at the British Library. In the book, de Pizan describes her visitation by three female Virtues, Reason, Rectitude and Justice, who commission her with the construction of an imaginary city inhabited solely by women. Conflating the act of writing a book and the construction of an imaginary city with building a thesis against misogyny, her work has been seen as a proto–feminist manifesto.

'City of Ladies' focuses on the under–researched significance of the architectural and urban allegory portrayed in Pizan's text, as well as in the accompanying illuminations – miniature illustrations – which display different stages of the construction of the city. Alongside historical research, Haralambidou explores de Pizan's allegorical spatial scheme through an embodied act of design that combines medieval illumination drawing techniques on vellum with digital craft and film. This exhibition of drawings, models, objects and films aims to reframe de Pizan's message in an architectural context, but also to project her allegorical 'City of Ladies' into the future. Although her work was popular and influential at her time, it remained overlooked until being rediscovered in modern times, referenced and revered by Simone de Beauvoir, Judy Chicago and Tai Shani, amongst others.

"The female sex has been left for a long time now, like an orchard without a wall, and bereft of a champion to take up arms in order to protect it."

"… For this reason, we three ladies whom you see before you have been moved by pity to tell you that you are to construct a building in the shape of a walled city, sturdy and impregnable."

"… You alone of all women have been granted the honour of building the City of Ladies. In order to lay the foundations, you shall draw fresh water from us three as from a clear spring. We will bring you building materials which will be stronger and more durable, than solid, uncemented marble. Your city will be unparalleled in splendor and will last for all eternity."

Thanks and credits:
Research assistant: John Cruwys. The research is kindly supported by The Bartlett School of Architecture, UCL, Architecture Research Fund. With special thanks to B–Made at the Bartlett School of Architecture, UCL, Graham Reed and Kevin Doyle at Jaytec Glass and Ray Westall at Moss & Co Timber. An extract from: 'The Female Body Politic: Remodelling the Book of the City of Ladies' was presented at Architecture & Collective Life, 16th AHRA conference 2019, Dundee (see downloadable pdf below).

>Extract from: ‘The Female Body Politic: Remodelling the Book of the City of Ladies’ presented at Architecture & Collective Life, 16th AHRA conference 2019, Dundee.

>The Book of the City of Ladies: The British Library

>Penelope Haralambidou: The Blossoming of Perspective, 2007

>Publication: The Blossoming of Perspective, 2007