Alice Wilson: *A Mild Epiphany On My Bike* 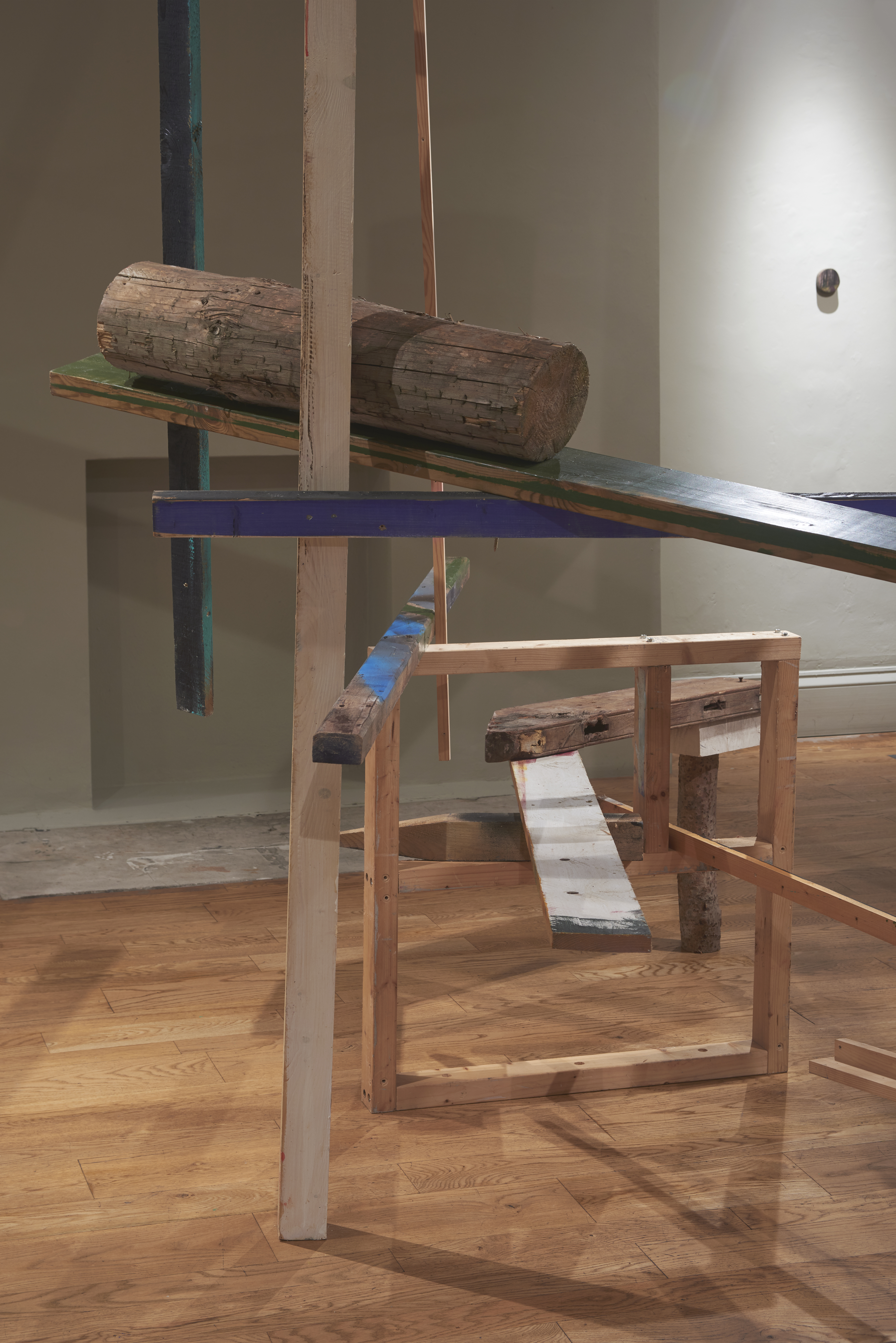 (image: Alice Wilson 'A Mild Epiphany On My Bike' installation photography by Andy Keate: text and list of works as a pdf)

*Alice Wilson will be in conversation with Frances Richardson on Saturday 6 November, at 12pm in Frances's solo exhibition 'If I measure it must exist' at Karsten Schubert Gallery, Room 2, 44 Lexington Street (second floor), London W1F 0LW; and at 3pm in her own exhibition. Spaces are limited, please email or telephone the gallery to reserve a place.

Alice Wilson's exhibition 'A Mild Epiphany On My Bike' takes up occupancy with an installation at the centre of the gallery. Wilson's practice has regularly used elements of landscape furniture and structures such as gates, benches, chairs, huts, cabins and treehouses as both subject and object. 'A Mild Epiphany On My Bike' presents work which takes elements of architecture and building in their most elemental, Laugierian sense.

Wilson rejects the specificity of a particular form or site. Instead, she is interested in exploring ideas of home and space. It is not a final representation that she works towards, but through the act of construction she is able to understand better what the fundamental meaning of the material is for her. None of the material Wilson uses is new; the nails, paint, hinges and splinters having lost their original function. However, rather than memorialising their histories, Wilson explores new ways of combining and framing her material to push it towards unfamiliarity.

The installation appears as a primary act of construction, with wooden beams joining in moments of tension, compression and suspension. Wooden planks and logs variously fulfil the roles of columns, beams and joists. Whereas Marc–Antoine Laugier's logs formed the primitive hut, Wilson's installation appears not to have a recognisable architectural superstructure. Yet the viewer still interacts with it in fundamentally architectural ways.

Wilson has often returned to the idea of 'the treehouse' but here her work seems to be a distillation of the act of building said treehouse; in fact it appears in equal parts both tree and house. If understood architecturally, this work remains closer to the methodology of the medieval master mason than the modern architect. It is the product of many individual decisions that occur as the form grows. The act of building is an organic process here. The palimpsestic quality of this piece is evident: there are sections of log with bark remaining, beams are littered with holes, nails, screws, scratches and paint, all of which appear like growths or cut branches. Quite where and how the wood will grow and form next is unknown but change seems inevitable.

with many thanks to Ben Zombory–Moldovan for the text
London, August 2021

'A Mild Epiphany On My Bike' the beermat, accompanies this exhibition.

>list of works and press release as a pdf

>Painting at the End of the World presents The Contact Layer