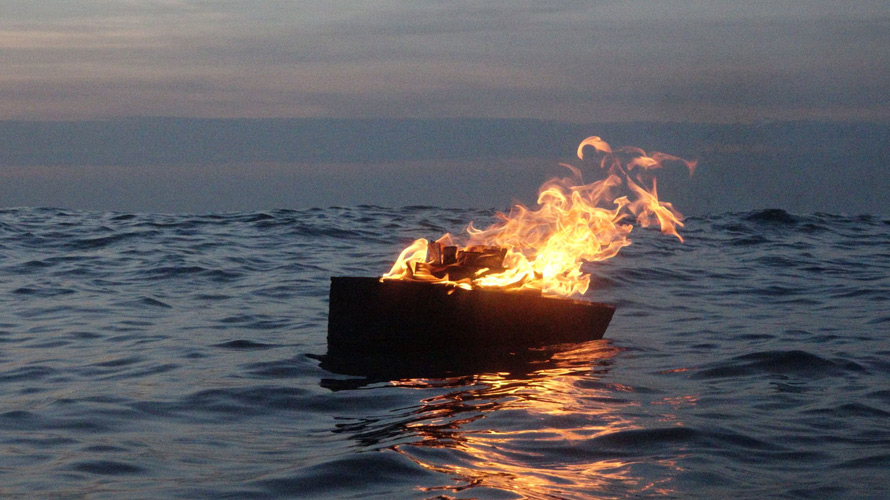 A boat on fire drifts on a calm sea in the last light of a flaming sunset. There is no reference to scale, yet we guess that the boat is of modest proportions because small waves cause it to rock vigorously. It is the hour when day becomes night, when the saturated colours of dusk give way to darkness. Filmed in real–time, in one continuous take with no cuts, there is no further narrative. The boat burns from the inside and its metal hull does not succumb to the flames.

A burning boat drifts on a calm sea at the pale end of a day. Its humble wooden frame is slowly consumed by fire until the embers glow red. As it burns you might compare it to a Viking longboat, the kind with a raised prow that looks like a plucked chicken's neck. Depending on Dinahet's framing, the boat occupies a small area in close–up surrounded by sea, or sometimes the shot widens to encompass the line of the horizon and the end of a promontory outlined like a black nub of land.

Marcel Dinahet began surrendering his sculptures to the test of time through the medium of video in the early 1990s. At that time he also began to submerge the objects he was going to film under water, and then he stopped making three–dimensional sculpture altogether. No doubt an important event prompted him to change the direction of his practice. All his early sculptures, initially highly worked but later reduced to the simplest pebble forms signifying presence, were consigned to oblivion under water and made inaccessible. As for Dinahet's burning boats – they belong to a long line of ritualistic pieces, a recurring theme in his practice. They are timeless yet they also chart a specific aspect of man's existence. And what of the pebbles, which he consigned to the sea or a lakebed? Those he has revisited, but this time in human form: A compacted nest of three dancers, rolling slowly across a floor as limitless as the sea, disappear bit by bit into the shadows and a twilight whose dimensions echo the vastness of space.

Domo Baal is delighted to present Marcel Dinahet's second solo show in the gallery. Dinahet was born in 1943 in Finistère in western–most Brittany, France (the name Finistère comes from the Latin 'finis terrae' meaning 'the end of the earth') and has worked as a sculptor since the 1960s. About 30 years ago his practice shifted abruptly from sculpture to video. His focus is the littoral, within and around seas, rivers, sources, ports, documenting both the places and the people who live and work in these boundary zones in many sites around the world, together with the issues that affect them. The subject of his work is always as local and direct as it is global in resonance, as personal as it is universal and political; his methodology and approach exude calm, curiosity, questioning, and consideration, never confrontation. His videos while appearing to be documentary in nature suggest the quality of note–taking and the personal archive. In France, Dinahet's work has been widely shown in public galleries, and is included in the Fonds National d'art contemporain (FNAC) as well as the FRAC collections of Brittany, Languedoc Roussillon, Champagne–Ardennes, Lower Normandy, Burgundy and Corsica among others. In 2013, in celebration of 30 years of the FRAC, Marcel Dinahet was selected as the artist representing FRAC Bretagne, in which respect he was invited to co–curate a year–long series of exhibitions and events to celebrate this significant anniversary. In February he takes up a residency at Alliance Française, Bogota, Colombia, and in March his video 'Famagusta – Varosha' will be included in 'La Mer au Milieu des Terres//Mare Medi Terraneum' curated by Cécile Bourne–Farrell at Museu Es Baluard, La Palma, Majorca.