Neil Gall: The Least We Could Do Is Wave To Each Other 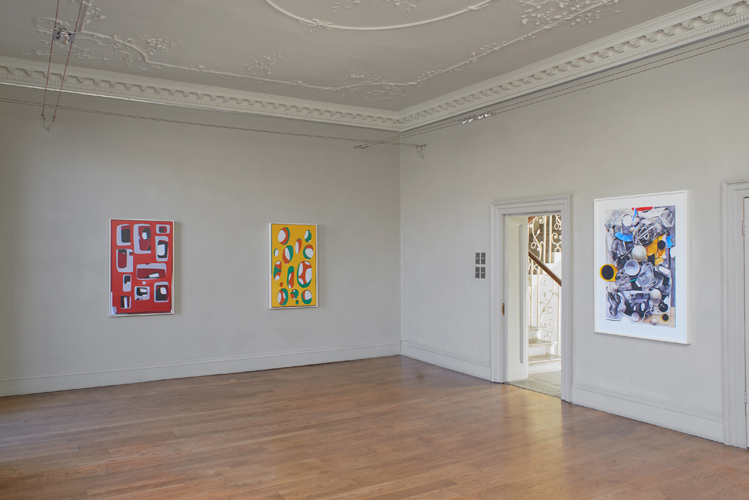 (image: Neil Gall 'The Least We Could Do Is Wave To Each Other' installation view, 2018, photography by Andy Keate, for full list of works, see pdf below)

Domo Baal is proud to present Neil Gall's 'The Least We Could Do Is Wave To Each Other', the artist's second solo exhibition in the gallery after 'Arrange your face' in 2015.

Gall describes himself as an abstract painter, while implicitly and teasingly he acknowledges both in his works and their titles that everything is something and indeed, everything does begin with something. The artist has held two solo exhibitions this year: 'Covers and Counterfeits' at The MAC in Belfast earlier this Summer and 'The Studio: Cover Versions' at The Henry Moore Institute in Leeds. The two exhibitions have set out distinctive strategies both within his work and its presentation, and in this exhibition we pay tribute to and wave a hand to both while allowing the artist's studio to seep in and take up (partial) residence. That's the least we could do.

'The Studio: Cover Versions' at the Henry Moore Institute focused entirely on an body of work over the last two years, and ongoing, that has seen Gall transform a substantial personal archive of 'The Studio' magazines from the 40s and 50s that were subscribed to and lovingly collected and looked after, and then posted to the artist, by Ruth Lough, his High School Art Teacher in Aberdeen. Initially as collages, and subsequently using drawing and painting, The Studio Collages have seen him rifle, plunder and play with the icons of British Modernism (as set out by The Studio Magazine, published since 1893 and now continuing online as studiointernational.com). Here we present an edited selection of Cover Versions alongside a new body of work: the 'Back Covers'. Less pictorial, as back covers frequently are, these works have been combined with rather more studio materials and detritus, offering a more drawingboard quality.

A full wall of over two hundred Back Covers in the gallery confronts 'Crafty' and 'Round the Bend' two paintings from 2016, while 'Working Space' a new monumental drawing will preside over the group mirroring as its source material elements across Gall’s entire practice. Sculptures that simply refuse to be regarded as mere source material any more, now take centre stage placed on an assortment of painty chairs and studio props, like precocious Court Dwarfs. This exhibition both compliments and complements the installation of 'Covers and Counterfeits' at The MAC, Belfast which set out groups of works which in both his practice and studio talk back and forth to each other in conversation: Paintings, Sculptures, Drawings and Collages. A family. Elements and details bounce in and out of each other and back again. Chicken and Egg are accomplices in full cahoots.

A new publication is available both at the gallery and from Cornerhouse/Home: 'Neil Gall – The Studio: Cover Versions'. It is designed by Alex Rich and set out as an archive of one hundred and forty seven Collaged Covers reproduced one to one and then bound as an assembly of manilla board. The publication also introduces two typewritten texts as a Foolscap folio by Ruth Lough and Dr. Jon Wood.

>Neil Gall: The Least We Could Do Is Wave To Each Other, list of works

>Neil Gall: The lowdown shows to see during frieze london

>Neil Gall: Covers and Counterfeits at The MAC Belfast

>Neil Gall: The Least We Could Do Is Wave To Each Other, as a pdf